In 2018, the Center for Disease Control and Prevention (CDC) reported that roughly 1 in 59 children are diagnosed with an Autism Spectrum Disorder (ASD). At January Moon, we’re proud to support the growing number of families facing both the challenges and gifts of that neurodiversity can present.

Autism can be defined as a range of conditions distinguished by difficulties in verbal and non-verbal communication, social interaction, repetitive behaviors, and in some cases, sensory integration (for more information on the co-morbidity of ASD and Sensory Processing Disorder (SPD), visit the STAR Institute and Autism Parenting Magazine). We love our ASD families and learning more about what life looks for them has helped us refine both our products and our mission at January Moon. Today, I want to introduce you to one of our very favorite mama-kiddo duos here in Nashville.

Tiffany is a non-profit owner, entrepreneur, and total inspiration, Raylan (like his name suggests) is an absolute ray of light. We’re so thankful that TIff was generous enough to take some time out from school, work, and spooky costume designing to share her family’s journey with ASD.

When did you start to notice that Raylan was processing situations/environments differently than his peers?

I began to notice around age two when I was working in Raylan’s church nursery class. I asked my husband to come observe him among his peers one day and it seemed to both of us as though Raylan played a little differently than his friends did. His peers were more interested in engaging with us verbally and their play appeared more relational and advanced. Raylan has always been very affectionate with us, but his preferred play was much more physical and repetitive.

For many parents and children, getting a diagnosis can be scary. What was the process like for your family? What resources did you find helpful?

Ultimately, our diagnosis was more validating and less scary. I fought pretty hard to get to an autism diagnosis and to secure the services that would best support Raylan and our family.

Our journey officially began when I finally told my pediatrician that I wouldn’t leave her office without a speech-language referral. She had been reluctant to recommend services because Raylan was born premature, delays can be typical for these children and many “catch up” to their peers over time. I have an amazing pediatrician but I felt confident in my ability to assess my son’s progress. Even as a first-time mom, I knew that I wasn’t overreacting. Because early intervention is so important, I didn’t want to “wait and see” even if I was wrong. Nothing would be lost by having an evaluation.

Raylan was initially diagnosed with a language disorder. We began speech therapy and were referred to a behavioral intervention program. Soon after, we began occupational therapy and discovered that Raylan had Sensory Processing Disorder (SPD). We’d found an explanation for some of his atypical behaviors such as full-body spinning and smelling/licking of objects, but even then, there was more to the story.

During this time, Raylan stopped sleeping. He would go to bed at 7 pm, not fall asleep until 9 pm, wake up around 11 pm, and be ready to begin his day at 2 am. It went on for three and a half years. We were all exhausted and R’s behavioral problems (aggression, destructiveness) began to escalate during the day.

Our pediatrician recognized that we needed serious help and referred us to a developmental-behavioral pediatric specialist at Vanderbilt Hospital. It was a total game-changer. For the first time, we had one doctor who was looking at the entire picture. She ordered full re-evaluations of everything and set us up with a doctor renowned for treating sleep disorders among special needs children. After sleep studies and even more therapies, Raylan was diagnosed with severe sleep apnea. He had his tonsils and adenoids removed and we started him on medication to help him get the rest that he so desperately needed.

Even with all of these answers sitting in front of us, I still had questions. Because R loved to be around people so much, autism had only been brought up once at this point. I made an appointment at Vandy’s Parenting and Behavior Clinic to see if I could pick up some new strategies and brought Raylan’s little sister along because we didn’t have childcare. After just twenty minutes of watching Raylan and Penelope playing together, the doctor put down her clipboard and said: “This child has autism.” I was relieved to understand why my efforts were falling short but heartbroken to know that the enormous effort Raylan was putting forth to adapt to his world had gone unseen.

Describe a typical day in the life of Raylan. What challenges does he face at school and home? How have you adjusted your routines to support Raylan’s unique sensory needs?

Our home is covered with visual schedules, reward charts, and reminders. Raylan loves to have a sense of routine and control and visual aids help. At school, where he has a heightened sense of anxiety, we try to ensure that he has the same sense of structure and safety.

At school, he receives Speech Therapy, Occupational Therapy, and Exceptional Education services in a general education class. Sometimes they come into the classroom to support him and other times, they pull him out for 1:1 instruction. It’s a lot of transition for him and we try our best to prepare him for the changes in his day. He always likes to keep his schedule handy.

Social dynamics can also be tough, but his school offers great accommodations like fidgets, a weighted blanket, and a “peace corner” to help him participate in his community and offer him support when he’s overwhelmed. During assembly (which he LOVES) he has noise cancelling headphones he can wear when things get too loud. At home, our sensory seeking boy has a giant trampoline and a crash pad to help him burn off excess energy when he needs to. Learning to harness and redirect that energy in a school setting is a big ask. He works hard and we’re so proud of him.

What are your “go-to” tools and techniques that help soothe and calm when things get overwhelming?

Raylan sleeps in an awesome tent bed called a “Privacy Pop” that has been a huge help with sleep anxiety. It also serves as a calming space of his own in our house if he needs one.

He likes deep pressure, so bear hugs, back-scratching and requested tickling are all very soothing to him. Short repetitive phrases (“I’ve got you.”) are very reassuring and he will often ask me to pray for him. We’ve been working on counting to one hundred when his anxiety starts to escalate and it’s been really helpful. Like most kids, he loves stuffed animals. Sometimes I can talk to him through them like puppets, which he loves. It probably feels safer to him than when I address him straight on.

When and how does Raylan use his January Moon Sensory Necklace and Bracelet?

He wore it on “Walk to School Day” and it was very helpful to have in the middle of a large crowd. I could tell that it was especially comforting when we arrived at school. His day had started differently and he wasn’t sure about what would happen next. He immediately started chewing on the necklace and which was a good indicator to me that I needed to prepare him for his next transition. He wears his bracelet almost every day I think it’s comforting for him to know that relief is easily accessible if he needs it.

For parents reading this at the beginning of a special needs journey with their child, what do you wish someone would have told you when you first found out Raylan had autism?

There is so much unexpected freedom and beauty in learning who your kid is once they are removed from the typical track and in learning who you are, not just as a parent but as a person. Your child is still the same child, before and after the diagnosis but your world does change. In some ways, the world will feel like a much harder place to live, even harder than you could have predicted. But eventually, you will see that in other ways, we are the lucky ones. Our children bring out the best in us and we get to be the “best” versions of ourselves on a daily basis. Raylan showed me a new definition of “best” a better one, in my opinion. There may be fewer trophies in life but there is so much more gratitude.

Children can be the most incredible teachers. What unexpected lessons have being Raylan’s mom taught you?

As someone who has always been very performance-driven, fighting the notion that “I am what I do,” Raylan has shown me what it means to love, and be loved, just because of who we are. It’s filled with grace. No matter what does or doesn’t get done on my daily checklist, or whether I’ve lost my patience or said yes to every single request, every night when it’s time for bed he just wants cuddles from me, as his mom.

Halloween is coming up. With busy sidewalks, crazy costumes, and CANDY, it can be a lot for even neurotypical children to process. How do you help Raylan prepare for the big day?

Raylan LOVES a costume. He loves dressing up “fancy” and he often will change his clothes 2-5 times in a day. So, Halloween is a hotly anticipated holiday in our home. We always go trick or treating with a lot of friends and there’s nothing he loves more than a play date in costume with candy! He does scare pretty easily though. And because he is such a visual learner, he can literally be haunted by scary visions days to months later. I am very cautious of the house decorations and making sure that we trick or treat early to avoid some of the more adult-themed scary costumes. Raylan also struggles with impulse control and because of his large size, we do have to remind him to “make room for littles” in his excitement to get to the next house, run up a walkway, or grab a ton of candy. He LOVES younger kids and his role as a big brother,  so he’s happy to comply, he just needs a lot of reminders!

Our community is filled with wonderful, unique children with equally unique needs. For some families like Tiffany’s, finding the right diagnoses and support team to address those needs can be a challenging journey. I’m so thankful to Tiff and Raylan for sharing their story with us and reminding us how beautiful challenging can be. 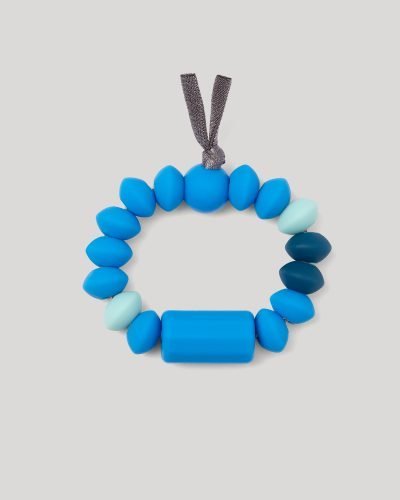 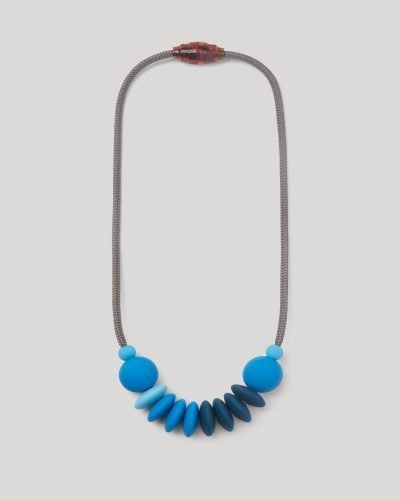 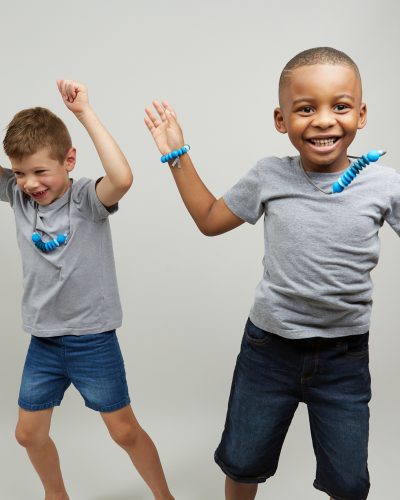 Be the first to know about exciting new arrivals, sales, and special events.